Program Photogallery About Project Who is Who Exhibition Contact us
Brad Holtz’s address to the readers of isicad.ru/isicad.net

24 years ago, I made my first visit to Moscow. For those that are old enough to remember, this was in the middle of Perestroika and I was there as a technical consultant with a US government team working to bring US technology to the Russian market — a first attempt at opening the doors to real commerce between formerly bitter enemies. It was a tense, but hopeful environment. There wasn’t much in the way of external sales of design technology to the Russian market at the time — just a small office of IBM and a small AutoCAD reseller. Much of the design technology that was used in Russia at the time was developed internally. One key constraint on the Russian economy — lack of access to fast computers-proved to be a major asset. Developers were forced to learn how to create elegant software that could run effectively on slower machines, while the West focused on different development strategies that could afford to waste compute cycles. Today, Russia’s strength as a component supplier and research partner stems from those «hardware handcuffs» from the early days of CAD software.

COFES (the Congress on the Future of Engineering Software) is a unique environment. COFES was created after my partners and I made the following observation: For us, the most valuable part of the conferences and trade shows we attended had nothing to do with the content of the presentation — the biggest value came from the serendipitous conversations in the hallways between sessions. Each COFES is designed to foster those conversations.

So we set out to design an event that would focus on the interstitial spaces to provide an environment of «enhanced serendipity». Over the past 12 years, this has evolved into an extremely successful format that has earned its place on the schedules of industry leaders worldwide.

In recent years, we have reached out to bring the value of COFES into other global communities. In 2006 we launched the COFES India Summit, and this year we are launching both the COFES Russia Seminar and the COFES Israel Forum.

I hope you will join us as we bring the spirit of COFES to the Russian market. At the COFES Russia Seminar, we exchange the distractions of a trade show floor and the formality of executive presentations for a comfortable atmosphere of interactive discussions, whether as a plenary, a working group, or one-on-one — with very influential players and innovative minds of the software world. As you join us at COFES Russia Seminar, I hope you will keep in mind both how far the Russian software market has come from its early days, and how those early constraints have shaped the strength of the Russian developer community today.

I look forward to meeting with you in September. 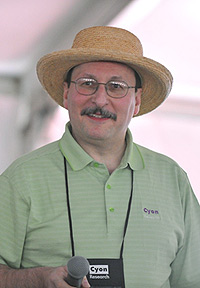 A well-recognized analyst and trusted voice in engineering software today, Brad Holtz’ incisive views on CAD and related applications are based on a keen understanding of new technologies and years of careful observation of their impact on design, engineering, architecture, and manufacturing.


«Brad Holtz’s knowledge and intuition regarding the financial aspects of the CAD industry are almost spookily profound and prescient. It’s not just that he’s been around for a long time; there are other analyst/consultants whose tenure is longer. It’s his quickness of thought and his ability to perceive patterns long before they are visible to anyone else,» comments Dr. Joel Orr, Cyon Research’s VP and Chief Visionary.

Holtz’s insights have made him a highly-valued advisor to the financial world and to industry executives. In addition to the investment and legal communities, his customers have included: Adobe, Autodesk, Bentley Systems, Boeing, Dewberry, EDS, Gensler, Hewlett-Packard, Intergraph, Kaiser Aerospace, Lockheed Martin, Mobil Oil, Océ-USA, PTC, SolidWorks, Tekla, UGS, and Xerox, among others.


Holtz’s Cyon Research Stock Index, comprising a group of CAD-related companies that since 2000 have grown twice as much as the NASDAQ, represents a financial guide to this rapidly evolving sector of the high-tech economy. He is a leading proponent of educating top user management about the value of investing in engineering software.


As CEO of Cyon Research Corporation, Holtz was the driving force in developing COFES: The Congress on The Future of Engineering Software. Now an annual must-attend conversation among major engineering software vendors and users, COFES has become the leading event of its kind.


Previous to his role at Cyon Research, Holtz founded WBH Associates, offering strategic planning and market analysis. His work as conference director of A/E/C SYSTEMS resulted in one of the most widely-praised and profitable conference and workshop programs in the CAD industry.


Holtz has followed the CAD industry since its inception. His book, The CAD Rating Guide, has long been recognized as an industry «bible,» and continues to be a resource for technology buyers worldwide. A registered architect, Brad has served as chairman of The CAD Society, and is on the board of directors of The CAD Management Institute. He is also a member of the Computer Graphics Pioneers. His influential opinions about the future of software have appeared in all the major engineering software industry publications, and he has been a featured speaker at industry events on four continents.

Brad holds a B.A. in biology from Washington University (St.Louis) and a B.Arch. from the University of Maryland.